Exploding Kittens: A Card Game About Kittens and Explosions and Sometimes Goats

Exploding Kittens is a card game for people who are into kittens and explosions and laser beams and sometimes goats.
Family-friendly, party game for 2-5 players (up to 9 players when combined with any other deck).
This is the most-backed project in Kickstarter history and all cards feature illustrations by The Oatmeal.

There are no reviews yet.

Only logged in customers who have purchased this product may leave a review.

A Kids Boutique is a participant in the Amazon Services LLC Associates Program, an affiliate advertising program designed to provide a means for sites to earn advertising fees by advertising and linking to Amazon.com. 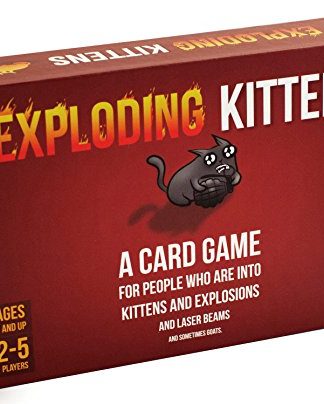 You're viewing: Exploding Kittens: A Card Game About Kittens and Explosions and Sometimes Goats $19.99 (as of September 17, 2018, 3:20 am) & FREE Shipping. Details
Add to cart
Do NOT follow this link or you will be banned from the site!